The Institute of Certified Public Accountants of Singapore (ICPAS) celebrated growing past 22,000 members today (July 8) at its Members’ Networking Night. The Institute now boasts a membership base of 22,289, enabling ICPAS to maintain its leadership position as Singapore’s largest professional body.

In the first half of 2010, the national accountancy body welcomed about 900 new members, a 40 percent increase compared to the same period last year. 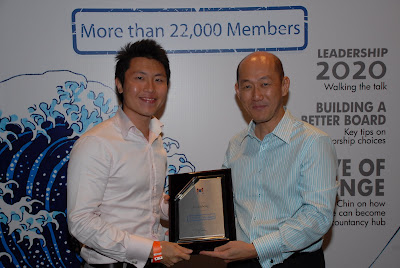 To mark this milestone, ICPAS President Dr Ernest Kan presented a special certificate to the Institute’s 22,000th member, Mr Brandon Liu. About 180 ICPAS members and guests who attended the event held at DXO @ Colours By The Bay were treated to celebratory programmes.

Dr Kan said, “We are delighted to have expanded our membership base to more than 22,000. The fact that the Institute has welcomed about 2,000 new members since I became President last April is encouraging news. And it is especially heartening to note the surge in membership in the first half of this year.”

“The significant growth in our membership shows that the CPA Singapore designation is an asset to our members and much valued by the business community. It also demonstrates the growing importance of the accountancy profession to the business landscape as Singapore consolidates its position as a global financial services centre and accountancy hub,” he added.

Mr Brandon Liu, 26, a Senior Associate with PricewaterhouseCoopers LLP, who joined ICPAS in May 2010, said: “I feel honoured to be acknowledged as the 22,000th ICPAS member. As a member, I’m able to keep my skills updated via its continuing professional education programmes and technical seminars. I also enjoy the networking opportunities from members’ activities, such as this Members’ Networking Night.”

Attentive to members’ needs, ICPAS introduced new schemes to make it more convenient for aspiring members to apply. Mr Liu, for instance, joined ICPAS under the Accredited Employer Scheme (AES), which ICPAS rolled out in September last year (2009). The plan facilitates provisional membership applications by engaging with accredited employers to streamline the application process. Currently, the Big Four firms are on the AES. Since the launch of the AES, the Institute has approved more than 400 applications under the scheme.

In the same month last year, the Institute introduced an online application function, which made it more convenient for applicants to sign up and shortened processing time.

Enhanced Role For ICPAS Expected To Further Boost Membership
ICPAS expects membership to increase further as it continues to work towards its strategic goals of AIM: Accountancy Excellence, Industry Growth and Member & Human Capital Development. In May this year, the Ministry of Finance accepted recommendations by the Committee to Develop the Accountancy Sector (CDAS) to transform Singapore into a global accountancy hub. Among the key recommendations were for ICPAS to be transformed into a professional accountancy body with a global membership, outlook and standing, and the development of a globally recognised postgraduate professional accountancy qualification, which ICPAS will administer.

“As Singapore gears up to develop into a global accountancy hub, ICPAS is expected to play a bigger role. We have been building our capabilities and infrastructure, especially in the areas of research, technical resources and professional education. We expect our membership base to expand even further as the Institute develops into an accountancy body with a global membership, structure and standing,” said Dr Kan.

The Institute has been ramping up its infrastructure and offerings. In June last year (2009), ICPAS set up ICPAS Research, focused on producing research on accountancy and business. Last year, the Institute also strengthened its leadership team with the addition of Mr Teo Ser Luck, Senior Parliamentary Secretary for Ministry of Community Development, Youth and Sports and Ministry of Transport, as ICPAS Advisor and Mr Gerard Ee, Chairman of National Kidney Foundation, Tiger Airways and SIM Governing Council, as Vice- President. In December 2009, ICPAS organised its first Dinner & Dialogue, with Mr Teo Ser Luck as guest of honour.

In Q1 2010, ICPAS organised the 2010 Pre- and Post- Budget Roundtables, serving as a conduit for business leaders to provide feedback on the National Budget. In April, ICPAS launched the first of its Online Knowledge Centres providing resources on accountancy and business. Most recently in May, ICPAS launched the Singapore Institute of Accredited Tax Professionals (SIATP), the country’s first accreditation body for tax practitioners.

ISCA-SAC Advisory for Accounting Practices: New FAQ with examples on employees who are not able to perform their wo… twitter.com/i/web/status/1…