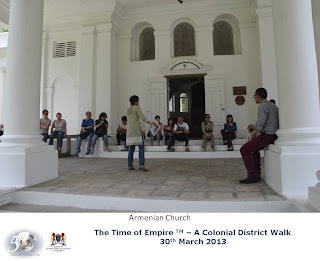 25 Members gathered on Saturday, 30th March 2013 to take part in the Colonial District Walk - The Time of Empire TM which worked on a simple principle: to bring people into places most other tours don’t and learn things they would never have known. It kicked off with a visit to St Andrew’s Cathedral and our members were brought back in time to the days of Sir Stamford Raffles and World War II as they listened intently to stories dealt out by our guide, Helena, and explored every crevice of the church. Many were fascinated by the fact that the Cathedral had been struck by lightning twice, learned about the hidden meanings behind the designs of the stained glasses and more.

Despite the searing heat, everyone followed Helena closely as she trotted off to Coleman street, named after George Drumgoole Coleman, Singapore’s first architect and adviser to Raffles. She then flashed out a rare photo of what used to be Coleman’s house right on that very street. As they proceeded on, the group arrived at the only Armenian Church in Singapore, a first visit for many in the group. More than just a church, as they ventured deeper in, what came into view was the parsonage and a Memorial Garden to Armenians, to which Helena pointed out the Memorial stone of Agnes Joaquim who bred Singapore's national flower.

The trip to the Supreme Court was much anticipated but alas, as renovations were underway, members could only explore the grounds of the high court where they also enjoyed a panoramic view of the town from the highest floor. The last two destinations were Chijmes and Raffles Hotel. Even though fatigue was beginning to set in, the endless store of anecdotes from Helena continued to entertain young and old and kept them going.

As the walk came to a close, many commented that the walk was educational but not overwhelming. “I will be keen to join future Heritage walks with my husband. It was very interesting!” remarked Ms Lim Kim Keow, which echoed the views of many present. All in all, it was definitely an enriching day for our members.

Get Our News Here